2020! It’s finally here. I didn’t think that I’d be alive to see the dawn of this new year! The year that was supposed to be the realization of Vision 2020 where Malaysia, my country would have achieved its status as a developed nation.


Yet, as we all know, the 5th and 6th Prime Ministers after Tun Dr.Mahathir Mohamad’s resignation in 2003, let this country astray and the 6th squandered most of the wealth of this country through his kleptocracy resulting in Malaysia being indebted to China with over a Trillion Ringgits!


I don’t have to repeat what the whole world already knows about the biggest heist carried out by the son of Tun Abdul Razak, as a result of his being orchestrated by his scheming spouse, the luxury-loving Rosmah Mansor.


Watch the video below where Datuk Seri Amar Singh, the Commercial Crimes Investigation Department Chief back then revealed to the media what they seized from one of the private residences of now-deposed 6th Malaysian Prime Minister, Najib Razak:

Back to the matter at hand, 2020 is a year which many of us looked forward to living a better life if only Malaysia had been ruled properly by those who came into power after Mahathir stepped down.

As we have witnessed it ourselves and I voted for change back in 2018, our much-respected, 4th and most illustrious Prime Minister, Tun Dr.Mahathir Mohamad made a stunning comeback into power and kicked Najib’s ass out of Putrajaya.

They want to see Najib & Co. behind bars a.s.a.p! They want to see all those crooks and corrupt former BN ministers, officials and cronies in prison and have their ill-gotten wealth seized!

It simply doesn’t work that way in Malaysia. Most of those who still support the former kleptocrats are so used to get bits and scraps of freebies are still expecting to receive whatever they can get their hands upon without working for it.

Hence, the nation simply can’t get back on track as per what we all so desired to see within our lifetime. A modern, well-developed nation where justice reigns supreme and the laws of the land are upheld, without fear or favour.

Reality is that, as I see it, the scales of justice are still very much lopsided in favour of the ones who once and still in a way wield extraordinary power.

Despite all the crimes and abuse of power and position that have been charged against Najib and his cronies, none to this date has really been proven beyond any reasonable doubt by an obviously toothless judiciary.

Short of accusing the Malaysian justice system to be so corrupt, all that change expecting citizens of Malaysia who voted the Alliance of Hope coalition into power can only sigh in despair watching the crooks still sashaying their way, here and there without any hindrances.

We can’t expect Tun Dr.Mahathir Mohamad to come up with miracles. He is already struggling to right all the wrongs within these short space of time but he is not an ‘Aladdin with a magic lamp’ where he could summon a Genie to change all the injustice deeply entrenched in the Malaysian federal and state governments overnight.

He has to deal with the opportunistic DAP Chinese who are emboldened by their newfound authority by being part of the Alliance of Hope Coalition who are now in the Federal and State Governments. They are constantly pushing for this and that nowadays and at times even brazenly demand that the Malays concede whatever little rights they have left.

The Dong Jiao Zong, a hardcore Chinese chauvinist association of Chinese schools vehemently oppose the reintroduction of Jawi, the Malay calligraphic system from being taught in the vernacular Chinese schools.

They were ready to hold a congress opposing the Ministry of Education’s stand on teaching Jawi in all schools till the Royal Malaysian Police obtained a court order preventing the Dong Jiao Zong in doing so.

Not all Chinese are as recalcitrant as the chauvinists in the said Chinese pressure group.

Here’s a comment in social media from Liew Wean Chee, a Malaysian Chinese professional who doesn’t agree with them.

I congratulate and applaud her for her brave and courageous stand against the shit-stirrers of the Dong Jiao Zong. She is the type of Malaysian that we can all be proud of and support.

Even Prime Minister Tun Dr.Mahathir Mohamad was so peeved at the Chinese Educationist Pressure group that he issued a warning that the Dong Jiao Zong Chinese were only going to get themselves hurt if they were to go ahead with their ‘Anti-Jawi’ event. 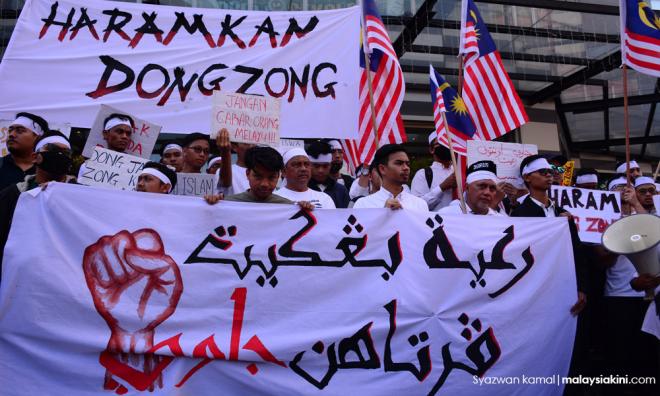 As expected, the Malays through various NGO’s gathered to protest and show their displeasure against the Dong Jiao Zong, asking for it to be declared illegal and deregistered by the Malaysian Registrar of Societies.

The Malays have been so accommodating in accepting Chinese and Indian immigrants during the formation of the Federated Malay States after getting independence from the British Colonials back in 1957.

The Dong Jiao Zong are just getting too big for their britches.

The MCA @ Malaysian Chinese Association have distanced themselves from this issue and declared that they have no objection to the teaching of Jawi in the vernacular Chinese and Indian schools.

On the other hand, the DAP are not happy with the court order obtained by the Royal Malaysian Police preventing the Anti-Jawi congress which was to be held by the Dong Jiao Zong!

Hence, we can safely say that the DAP are those who are behind the chauvinist Dong Jiao Zong pressure group. It’s the DAP who are instigating and fanning the flames behind the Dong Jiao Zong calling for the Malaysian Education Ministry to withdraw the Jawi module from being taught in the vernacular schools system.Can the DAP now be termed as Devils After Power for being the shit-stirrers behind the Dong Zong?

Top it off with the way, Anwar Ibrahim, a former convicted sodomite, who was then pardoned by the then Supreme King of Malaysia, is pressuring Tun Dr.Mahathir Mohamad, the current 7th Malaysian Prime Minister to step down and hand over power to him after becoming the President of the PKR, the major political party in the ruling coalition.

Personally, I think Malaysia deserves another more suitable candidate to take over from Tun Dr.Mahathir Mohamad as our 8th Prime Minister.

Anwar Ibrahim is not going to be right as our country’s next leader for he has a tainted reputation and known to not deliver as he had promised voters many times before. Not a man of his word.
On the matter concerning Israel and the Zionists, he has spoken in America where he has shared the following and also in a way, stated his opposition to the ruling against the usage of the term ‘Allah’ by Christians and other beliefs. He also expressed his objection against the move to uphold the Syariah in Malaysia:

He can be said to be a ‘play safe’ politician and a political chameleon. He changes his stands according to wherever he is, dancing to the tune of his hosts.

We need better. Problem is that, there is a dearth of reliable and trustworthy candidates amongst those who are currently active in the Malaysian political scene.