It is indeed sad and shocking to learn of these mass graves of Rohingya and Bangladeshi illegal migrants and the existence of so many illegal detention camps set up by human traffickers within our nation’s borders, in the dense jungle and forests of Wang Kelian in Perlis. 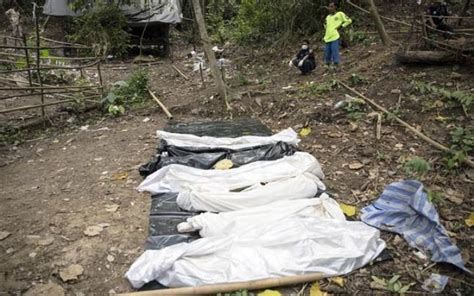 Similar large numbers of mass graves had been discovered in the bordering jungles of Thailand where evidence of human trafficking had been found by the Thai security forces.

The gruesome remains of the victims of poverty in Bangladesh and ethnic cleansing genocide of Rohingya Muslims by Myanmar’s Buddhist murderous, rampaging, terrorist, ‘monks’ have led to the mass exodus of the beleaguered masses of impoverished and brutalized people from the Arakan region and bordering Bengalis of Bangladesh. 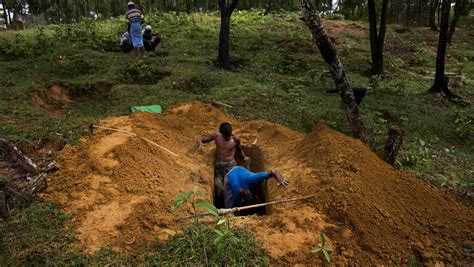 I wonder what have the Forestry Department Rangers of both Malaysia and Thailand been doing all these while that these massacres and setting up of such human trafficking illegal camps has escaped detection of both countries’ security forces and authorities? Gang rapes of pretty and young Rohingya females were often taking place at these illegal human trafficking camps. ASEAN does not have it in them to stop these crimes. They are just as useless as the UN!

For the foreign media to blindly accuse both Thailand and Malaysia of having such slave camps would be grossly irresponsible because the governments of both countries, had no inkling whatsoever of such camps and the mass graves because those who were employed as Forest Rangers and Security Personnel, had not been doing their job as they should have! I believe that they received bribes to look the other way!

Malaysia has been kind enough to provide refuge for quite a large number of these Myanmar Rohingya illegal refugees and the equally large number of Bangladeshis who have in a way added to our country’s social and economic burdens.

We have allowed millions of illegal migrants, to remain within our borders on humanitarian grounds at the risk of alienating our own citizens who have been robbed of their fair share of economic opportunities due to the influx of foreign citizens from mainly Indonesia, Thailand, Myanmar, Vietnam, Cambodia, China, Philippines, India, Pakistan, Bangladesh, Nepal, Nigeria, Uzbekistan and other countries from around the world.

Imagine if our authorities such as our Immigration Department has been as strict and efficient like the Immigration, Customs and Enforcement Border Patrol officers of the United States of America, Canada, United Kingdom and Australia where those countries who often trumpet themselves as being the bastions of liberty, freedom and human rights champions would not think twice of putting those illegal immigrants on the next flight out of their esteemed nations back to wherever they came from?

Malaysia which is still a developing country has on humanitarian grounds been tolerating the teeming ever increasing arriving masses of foreigners both legal and illegal who have been robbing our lower income group Malaysian citizens of jobs, trading, and other business opportunities all these years!

You can’t miss coming across so many foreigners when you go to the cities, towns and even the most obscure rural areas here in the Malaysian Peninsular, Sabah and Sarawak!

Foreigners seem to have taken over Chow Kit, Masjid India, Kampong Baru, Selayang, Ampang, Cheras and all areas here in the Klang Valley! Try going to Klang? So many foreign workers both legal and illegal would be around that you would feel as if you were in a different country!

So, to learn about these secret detention camps and the discovery of so many mass graves is really something that we never imagined would take place here along the borders of our beloved nation and that of our immediate neighbor, Thailand!

All I can pray for is that our country’s authorities and those of Thailand will go after the human traffickers and see to it that they are dealt with in the severest of manners! Capital punishment for each and every rotten mass murderer who have killed or caused the Rohingyas and Bangladeshis to suffer and die such horrible deaths in those jungles.

Now, let’s see for ourselves the reason, why the Rohingya Muslims are fleeing from Arakan [now called Rakhine] which is their homeland in Myanmar [used to be called Burma]?

The Rohingya Muslims are being systematically butchered by the so-called Buddhist monks as their campaign to rid Myanmar of these Muslims. The head terrorist is a demon called Wirathu! Watch this video:

Here’s another video showing the genocide and massacre of the Rohingya Muslims:
Here is the Devil instigating the massacre of Myanmar’s Rohingya Muslims!
It’s so sickening to watch the faces of these Myanmar bastards, pretending to be Buddhist monks!
This is the reason why, they risk their lives, fleeing the rampaging, murdering, Buddhist monks and their hordes of fanatic bloodthirsty, devilish, Myanmar nationals, who spare no one, in their ethnic cleansing, of the Arakan Rohingya Muslims!
So, will the Americans, British, Europeans, Australians, Canadians save these Rohingya Muslims?
Fat chance of that ever happening! In the meantime, Malaysia and Indonesia are the ones, having to bear the costs, and forced to shelter these victims of the fanatical Burmese Buddhists!
So much for their A Mi Ta Ba bullshit! They are just apartheid, racist, mass murdering killers! Not real monks.